Vinson, case in which the U. I Inrespondent Mechelle Vinson met Sidney Taylor, a vice president of what is now petitioner Meritor Savings Bank bank and manager of one of its branch offices. When respondent asked whether she might obtain employment at the bank, Taylor gave her an application, which she completed and returned the next day; later that same day Taylor called her to say that she had been hired.

With Taylor as her supervisor, respondent started as a teller-trainee, and thereafter was promoted to teller, head teller, and assistant branch manager.

She worked at the same branch for four years, and it is undisputed that her advancement there was based on merit alone. 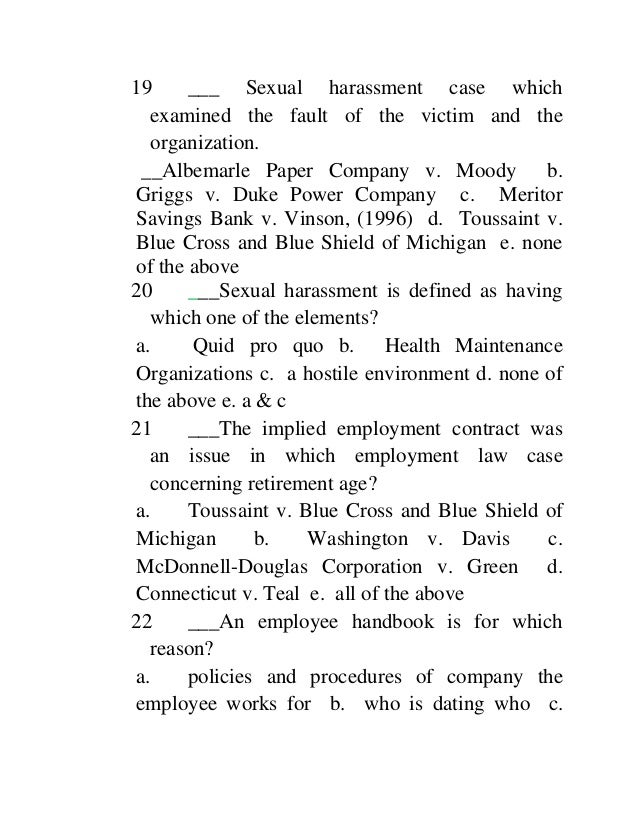 In Septemberrespondent notified Taylor that she was taking sick leave for an indefinite period. On November 1,the bank discharged her for excessive use of that leave. Respondent brought this action against Taylor and the bank, claiming that during her four years at the bank she had "constantly been subjected to sexual harassment" by Taylor in violation of Title VII.

She sought injunctive relief, compensatory and punitive damages against Taylor and the bank, and attorney's fees. At the day bench trial, the parties presented conflicting testimony about Taylor's behavior during respondent's employment. Shortly thereafter, however, he invited her out to dinner and, during the course of the meal, suggested that they go to a motel to have sexual relations.

At first she refused, but out of what she described as fear of losing her job she eventually agreed. According to respondent, Taylor thereafter made repeated demands upon her for sexual favors, usually at the branch, both during and after business hours; she estimated that over the next several years she had intercourse with him some 40 or 50 times.

In addition, respondent testified that Taylor fondled her in front of other employees, followed her into the women's restroom when she went there alone, exposed himself to her, and even forcibly raped her on several occasions. These activities ceased afterrespondent stated, when she started going with a steady boyfriend.

Respondent also testified that Taylor touched and fondled other women employees of the bank, and she attempted to call witnesses to support this charge. But while some supporting testimony apparently was admitted without objection, the District Court did not allow her "to present wholesale evidence of a pattern and practice relating to sexual advances to other female employees in her case in chief, but advised her that she might well be able to present such evidence in rebuttal to the defendants' cases.

Respondent did not offer such evidence in rebuttal. Finally, respondent testified that because she was afraid of Taylor she never reported his harassment to any of his supervisors and never attempted to use the bank's complaint procedure.

Taylor denied respondent's allegations of sexual activity, testifying that he never fondled her, never made suggestive remarks to her, never engaged in sexual intercourse with her, and never asked her to do so.

He contended instead that respondent made her accusations in response to a business-related dispute. The bank also denied respondent's allegations and asserted that any sexual harassment by Taylor was unknown to the bank and engaged in without its consent or approval.

The District Court denied relief, but did not resolve the conflicting testimony about the existence of a sexual relationship between respondent and Taylor.

It found instead that "[i]f [respondent] and Taylor did engage in an intimate or sexual relationship during the time of [respondent's] employment with [the bank], that relationship was a voluntary one having nothing to do with her continued employment at [the bank] or her advancement or promotions at that institution.Facts of the case.

After being dismissed from her job at a Meritor Savings Bank, Mechelle Vinson sued Sidney Taylor, the Vice President of the bank.

Vinson charged that she. Audio Transcription for Oral Argument - March 25, in Meritor Savings Bank, FSB v. Vinson F. Robert Troll, Jr.: The bank denied that Ms. Vinson or anyone else had ever complained about any harassment or any other discriminatory activity.

United States Supreme Court MERITOR SAVINGS BANK v. VINSON, () No. Argued: March 25, Decided: June 19, Respondent former employee of petitioner bank brought an action against the bank and her supervisor at the bank, claiming that during her employment at the bank she had been subjected to sexual harassment by the supervisor in violation of Title VII of the Civil .